Two DBs, One TX, No Problem

I was recently confronted with a scenario that required a Spring Boot application to manipulate information spanning two different SQL databases: this meant that one business entity lived in both databases at the same time. This posed a slight problem regarding data consistency: should any write operation to either one of the databases fail, then the system had to be rolled back to its previous state – in both databases.

As it turns out, this issue is rather easily tackled using Spring and its assorted data and transaction handling libraries, through configuration alone. Easy, once you’ve dug through the documentation, half of StackOverflow and Spring’s source code, that is.

In order to spare others and my future self the misery of having to do this painstaking research again, I’ve put together a step-by-step guide with the solution to this challenge.

The source code can be found here, on github and goes hand in hand with the explanations provided in this post. Once you’ve read this text, you should be able to easily understand the code; opening the code in a window parallel to this will make cross-referencing information a lot easier.

A decent level of familiarity with the Spring Framework in general is required if you want to delve into the technical intricacies of this tutorial. Some basic knowledge of JPA – particularly JPA entities – is also necessary.

The (rather artificial) Use Case

Let’s start by defining a simple – albeit slightly artificial – business case, that we’ll use to guide ourselves along throughout this tutorial:

A customer places an order with our Fictitious Online Retailer, by invoking a service with their Order. The retailer’s application then forwards the received order to two different departments:

The app does this by writing directly into the respective department’s database instance. The two DBs are completely separate from one another, and they have different views on what constitutes an order.

Note: The demo application on github does not implement the REST Controller

From a business perspective, it would be an absolute disaster if a new order were saved to only one of the two DBs, due to one system being temporarily unavailable or different failures, such as a constraint violation or a bug in your code. This would result in either the company processing a payment and never shipping the items ordered, or shipping items without having received payment.

In order to avert any of these – admittedly, somewhat artificial – scenarios, the retailer’s application needs to make sure that the order is either successfully persisted to both DBs or neither.

One way of solving this challenge in our Spring-Data enabled application, is by using Spring’s ChainedTransactionManager

Enabling transaction management across both data sources can roughly be thought of as a three stage process:

For our example we’ll be using properties-based datasource definitions to set up our two JDBC connections. A more in-depth guide for setting up a single datasource can be found on baeldung.com/spring-boot-configure-data-source-programmatic.

We’ll start out by creating our application.properties like so:

The one thing to watch out for here are the two different prefixes that help us keep the two data sources separate:

Your prefixes can be whatever you like them to be. They don’t have to contain the string datasource. I decided to use spring.datasource- to stick close to Spring convention. Other than that, it’s business as usual: we set the JDBC driver’s class name, the JDBC URL and the credentials for the respective data sources.

Now that we have our properties pointing to our DB, it’s time to use them to create the two DataSources, that we will be using in our code. To do this, we’ll be using @Configuration annotated Java classes, whose methods will be invoked during application startup to generate the necessary beans.

Have a quick look at the two *DataSourceConfig files in the sample project here.

Since we want to keep the two DBs neatly separated from one another in our code base, we’re using two different configuration classes: AccountingDataSourceConfig and WarehouseDataSourceConfig. For the sake of brevity, we’ll only analyse the anatomy of one DataSourceConfig class. See inline comments below for an explanation of what each element does:

To recapitulate: we’ve configured our dataSource, which gets used by the entityManagerFactory, which in turn gets used by our transactionManager. They also reference 2 further artifacts via package scanning:

The latter two are the actual elements that we will be actively using in our code in order to interact with the DB.

The following screenshot shows the package structure for the repos and entities: 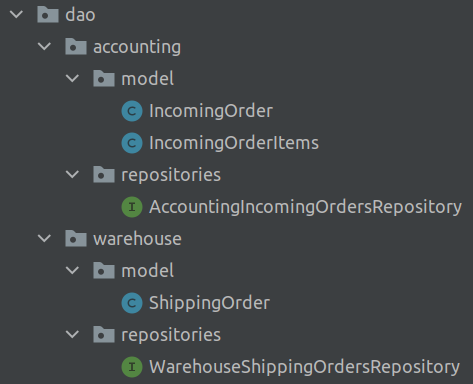 This structure allows the other WarehouseDataSourceConfig class and all its referenced Repository and Entity classes to cleanly coexist alongside our Accounting persistence layer. The Warehouse Repo and Entity will persist data to and retrieve data from the physical database configured using the properties prefixed with spring.datasource-warehouse.

Now that we’ve laid the groundwork enabling our application to interact with two different data sources, without burdening the business logic layer with any added complexity, we’re ready for the next step:

Make our app treat compound operations, involving both data stores, as one distributed transaction. To do so, we will create a new TransactionManager using an @Configuration-annotated class called MultipleDatasourceTransactionManagerConfig:

This new compound TransactionManager has now to be explicitly used, wherever we need distributed transactions in our app. The one and only example for this in our demo web-app is the method OrderProcessorService.createOrder.

As you’ve probably guessed, the line @Transactional(value="chainedTransactionManager", rollbackFor={Exception.class}, isolation = Isolation.READ_UNCOMMITTED) is where the magic happens. It’s here that we instruct Spring to span a transaction around the entire method. Since this method handles both write operations to both DBs, we want our new transaction to start before method execution commences, and commit as soon as the method has been successfully executed. Should the method execution result in an Exception – or any of its subclasses – being thrown, a rollback is triggered for both entities.

Test for the Worst Case

…but not so fast!

Here is a short cautionary tale, illustrating the need of listening to your parents. They probably told you when you were young: never trust a stranger and always wear clean undies. Since this is just a blog post written by some random person on the interwebs, it might very well be ridden with errors – intentional or otherwise – that might very well result in a Prod incident that turns your whites to brown. It’s therefore best to double check that the code provided actually does what it’s meant to do. Let’s write a unit test that ensures our code actually behaves as expected and rolls back the DB state in case of an Exception.

For our tests we will be using embedded H2 databases. We do this, by creating a new application.properties in our Maven project’s test/resources folder, like so, pointing to two different H2 instances.

Let’s cause an exception

Since we want to test the behaviour of our chainedTransactionManager, we’ll be exercising the method shown above – OrderProcessorService.createOrder(). The method does two things: it transforms the business entity Order to the two entities required by our two databases, and persists each one.

For the purpose of this test, we’ll make sure the first transformation and persisting operation goes smoothly, thus resulting in an uncommitted write to the first Accounting DB.

We’ll then break the second part of the logic, by causing an Exception to be thrown. To do this, we’ll mess up the shippingOrderTransformer on purpose.

The substitution magic described above happens in the nested class TestConfig that is annotated with @TestConfiguration. The @Test method then goes on to execute orderProcessorService.createOrder() which fails after the first <repository>.save() operation, thus resulting in a complete rollback of the state in both DBs. We check for this by asserting that both DBs are still devoid of data.

Congratulations, you’re done! You have earned yourself that spritzer.

Whenever possible, avoid having one Spring Boot application using transactions spanning multiple data sources, as this just causes complications on numerous levels. Should this however prove unfeasible for you or your use case, then the ChainedTransactionManager is about as plug-and-play of a solution as it gets. Once you get the configuration part done, it’s simply a matter of telling your app via annotations at the method level, where to apply the new chained transaction handler, and voilà.

The example code is there purely for illustrative purposes. Please refrain – to the best of your abilities – from copy-pasting larger structures or entire layers into your productive code. The dependencies between the various classes and layers are rather dirty and reflect the hit-and-miss nature of the creation process: I was trying to reach the elusive Ballmer Peak. You be the judge of whether I’ve succeeded or not and let me know what you think in the comments below.

We would like to use third party cookies and scripts to improve the functionality of this website.APPROVEMORE INFO